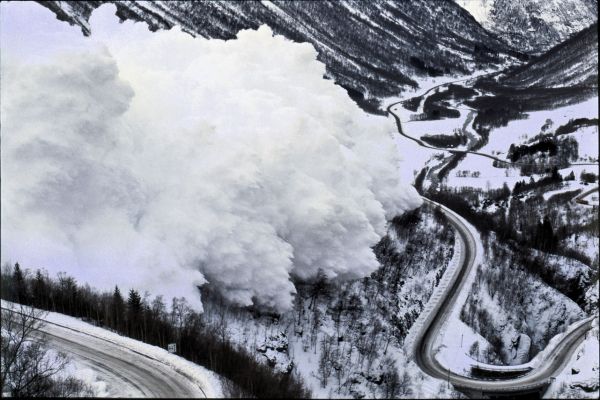 By their very nature, avalanches represent a major danger only in mountainous areas of the earth where geographic and meteorological conditions give rise to heavy rains and to accumulations of snow and ice prone to hurtling down in the valleys inhabited by man. A distinction can be made between two types of avalanches:

- Large-scale avalanches caused by very heavy rains, which threaten localities, buildings and communication links in all or parts of a valley. These occur spontaneously on the uphill mountain slopes and according to the meteorological conditions.

- Avalanches restricted to smaller local areas, which are mostly triggered by man in the course of his professional or sporting activities.

The damaging effects of avalanches may be widespread or limited, depending on the factors which provoked them. But just as in the case of landslides, a very localised incident can have consequences beyond its immediate surroundings; notably when communication links such as roads, railways and cable cars are interrupted or infrastructure is destroyed (important buildings, electric grids, telecommunication networks, water or gas conduits, or reservoirs of toxic or pollutant substances). Because of the very varied characteristics of avalanches and their often serious damaging effects, it would appear advisable for countries regularly under threat from this phenomenon to establish institutions responsible for studying snow and avalanches, so as to be able to ensure the existence of an alarm system covering their entire territory and to advise local authorities and the organs responsible for security in this field.

Just like avalanches, blizzards occur mainly in the cold regions of the northern and southern hemispheres of the planet. They are characterised by snowstorms and violent freezing winds which bring all life to a standstill over vast territories, particularly on the plains of North and South America, Asia and Northern Europe. This phenomenon can occur to a lesser extent on high mountains, mainly in winter, although snowstorms may be equally frequent during relatively long summer periods.

Under the influence of masses of Arctic or Antarctic winds, which cause a sharp fall in the normal temperatures, cold spells can strike even temperate regions.

This phenomenon threatens human life and considerably damages infrastructures and the environment, mainly by paralysing installations and disrupting services such as electricity supplies, which are vitally important to modern living conditions. It can also lead to a long-term stoppage of domestic and public technical equipment, of communication links and of all the equipment and installations of entire regions. 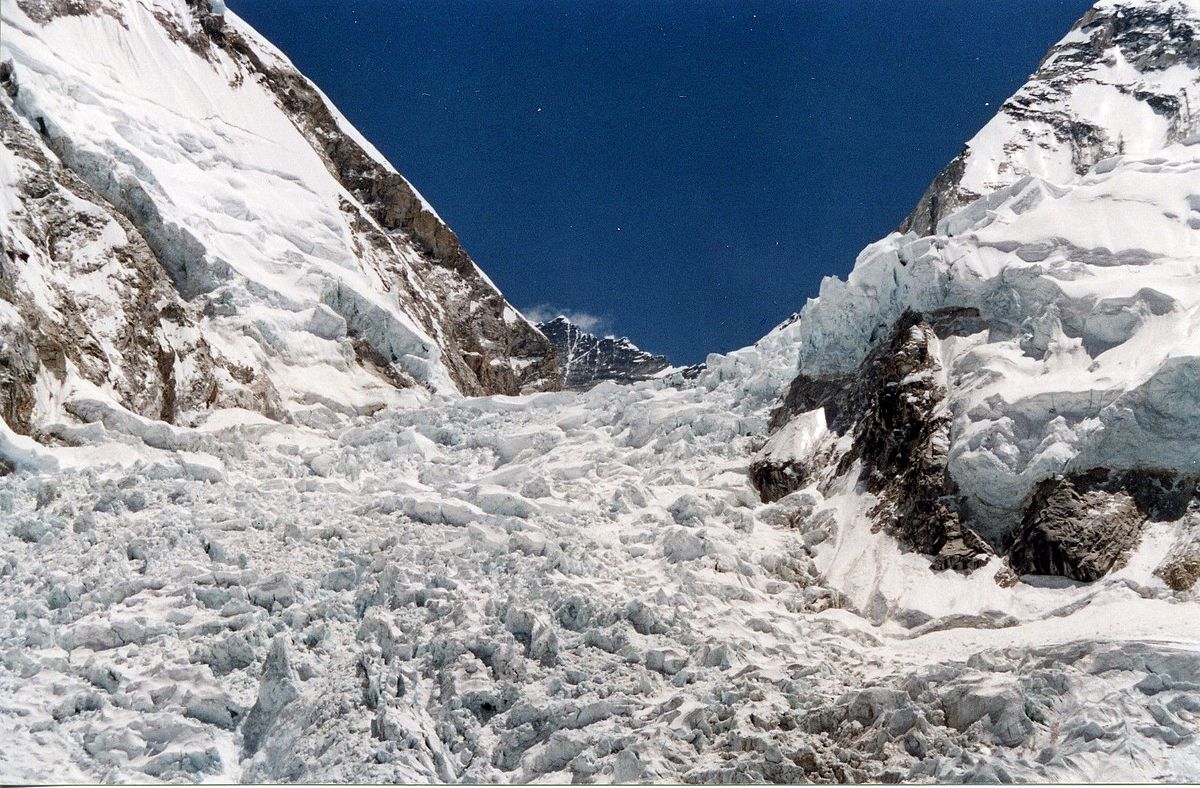 Areas at risk from avalanches can generally be identified by observation of the mountain slopes and by the study of the local records of past disasters.

Preventive measures will consist in identifying these likely zones and in the ad hoc layout, planning and implanting of buildings to prevent the triggering of serious avalanches. Anchoring and retaining devices will be positioned not only on the mountain slopes but also integrated in the infrastructure (walls, retaining or diverting channels, tunnels, galleries, etc.) built to protect threatened property. Planting trees is also an effective preventive measure.

At the community level, the consequences of avalanches will be avoided or at least limited by the following protective and preventive measures:

1. Selective monitoring of the snow and the danger of avalanches through the establishment for this purpose of a national institute of studies.

4. Constructing building which will prevent the triggering of massive avalanches on the uphill slopes and infrastructures such as walls, barriers, tunnels and galleries which will protect threatened property.

5. Depending on the seriousness of the danger from avalanches, forbidding circulation or the use of certain communication routes (roads, railways, etc.).

6. Artificially triggering locally restricted avalanches to prevent the accumulation of, and danger from, more massive falls.

7. Planning the evacuation of the population and livestock at risk (if need be, preventive occupation of civil protection shelters).

8. Setting up well trained intervention groups specialised in forecasting avalanches and rescuing persons buried by the snow, and making available the necessary means of intervention (rescue dogs). Informing the population.

9 As for blizzards and coId spells, they are inescapable but it is possible to identify the regions naturally at risk from them and the seasons when they occur. Preventive and protective measures will consist mainly in laying down adequate construction norms (insulation), advising people and the community on how to behave and what action to take (stocking food, fuel and heating material, and forming teams of technicians specially trained and equipped to undertake repairs). Familiarising the population with the principles of precaution and behaviour is also an important aspect of prevention and intervention.

As soon as the risk of an avalanche becomes apparent, especially in view of the thickness and structure of the snow and the evolution of the weather conditions, local, regional or national authorities should take the specific protection measures required by the situation (observation and alarm service; closing off the area under threat; banning road and rail traffic; informing the population and giving advice on how to react; and if need be, evacuating all or some of the population, as well as their property and livestock. Consultation with experts is absolutely necessary, as is knowing about the damage which had been caused on previous occasions.

The management of protection, search, rescue and assistance (rehabilitation) falls to the local or regional authorities which ensure the coordinated engagement of the civil and military means and more particularly of the search and rescue parties with detection equipment and dogs specially trained to search for persons buried by the snow. Requisitioning and using machinery (diggers and snowploughs in particular) should be the object beforehand of a precise and detailed plan of intervention, as should also assistance measures for the homeless and the priority repairs to the infrastructure.

The above measures are valid in case of blizzards or snowstorms and cold spells whether or not electricity supplies are interrupted.

Should any buildings or the entire locality be destroyed and vital components of the infrastructure put out of action, it is important to ensure that specialised personnel (civil engineers) carry out a technical check of the stricken area to identify dangerous buildings and areas. The area where the avalanche started must be monitored continuously while emergency rescue and protection operations are taking place so as to protect the population and intervention and assistance personnel from further danger.

4. Instructions for the population

4.1 General precautions and safety measures when a potential danger exists

- Respect laws on land development especially with regard to forbidding building in areas at risk.

- Find out about the danger of avalanches in your area of residence and the planned protective and assistance measures.

- Know-how to react and behave in case of an avalanche and familiarise yourself with the relevant assistance rules.

- Always keep an emergency kit ready for the family. This should contain identity papers together with medical and vaccination certificates and blood groups, personal medicines, a portable radio and a hand torch with spare batteries.

- In case of danger, close all doors and windows and if possible reinforce shutters.

When a blizzard or cold spell is imminent :

• If the premises have an independent heating system (fireplace, gas radiator) make sure you have a sufficient supply of fuel in reserve or purchase heating equipment not requiring electricity.

• Fit out a well-insulated room, without windows if possible, as a living room for all the family and store therein the emergency equipment: hand torch, portable radio, candIes, matches, food supplies, blankets and sleeping bags etc.

• Drain off water and central heating pipes to avoid damage due to icing up if the electricity is cut off. If need be turn off the entry taps.

- Keep calm, do not panic. If possible help neighbours in difficulty, the handicapped, children, the aged and shelterless.

- Know how to react and behave in case of an avalanche and act accordingly.

- Obey the orders of the authorities and the intervention teams particularly as regards the evacuation of people and livestock. Do not forget to cut off the gas, electricity and water and lock the door with a key.

- Do not use private cars unless authorised by the intervention organs (evacuation of the wounded, sick, children and the aged).

- Listen to the radio but do not use the telephone without good reason as this overloads the network.

During a blizzard or cold spell:

• Keep the house closed so as to keep the temperature as high as possible for as long as possible. Avoid opening doors and windows.

• Do not go out of the house during the storm unless it is absolutely necessary. Hold on to a rope or rail so as not to get lost and secure it to the entrance door of the house.

• Take the necessary steps to ensure that the pipes do not freeze (drain off, add antifreeze in sanitary installations and central heating radiators).

• Make sure the livestock is in the stable and has a sufficient reserve of food and water.

• Drive carefully and only use main roads. If the roads conditions are bad and the weather gets worse, stop the vehicle and seek shelter in a nearby building.

• If the vehicle is unable to continue, avoid getting exhausted and do not expose yourself to the cold. Stay in the vehicle, and ventilate it by opening the side window away from the wind. Run the engine as little as possible and make sure the snow is not blocking the exhaust pipe (risk of poisonous carbon monoxide fumes). Switch on the inside (roof) and parking or sidelights only. Move your limbs, hands and feet constantly and try not to sleep as you otherwise risk frostbite.

- Check if there are any wounded or persons in difficulty in the neighbourhood and assist them.

- Listen to the radio but do not use the telephone unless absolutely necessary. Collaborate with the official rescue and assistance organs. Help in treating livestock and in emergency repair work.

- Help to identify the victims.

- When electricity is switched on again, check, especially after a blizzard or coId spell, that the conduits, pipes and installations are in working order and fill the radiators before switching on the central heating.