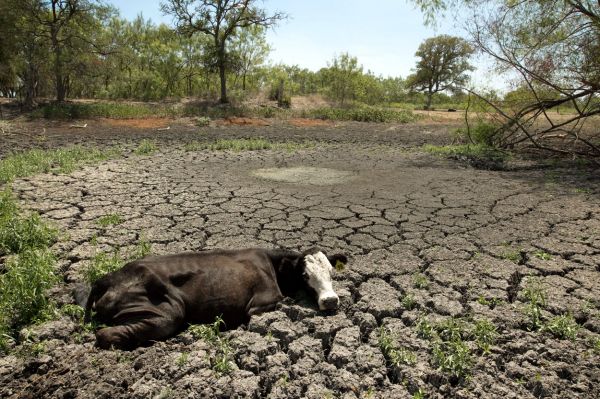 A drought or drouth is a natural disaster of below-average precipitation in a given region, resulting in prolonged shortages in the water supply, whether atmospheric, surface water or ground water. A drought can last for months or years, or may be declared after as few as 15 days. It can have a substantial impact on the ecosystem and agriculture of the affected region and harm to the local economy. Annual dry seasons in the tropics significantly increase the chances of a drought developing and subsequent bush fires. Periods of heat can significantly worsen drought conditions by hastening evaporation of water vapour.

Many plant species, such as those in the family Cactaceae (or cacti), have drought tolerance adaptations like reduced leaf area and waxy cuticles to enhance their ability to tolerate drought. Some others survive dry periods as buried seeds. Semi-permanent drought produces arid biomes such as deserts and grasslands. Prolonged droughts have caused mass migrations and humanitarian crisis. Most arid ecosystems have inherently low productivity. The most prolonged drought ever in the world in recorded history occurred in the Atacama Desert in Chile (400 Years).

Mechanisms of producing precipitation include convective, stratiform, and orographic rainfall. Convective processes involve strong vertical motions that can cause the overturning of the atmosphere in that location within an hour and cause heavy precipitation, while stratiform processes involve weaker upward motions and less intense precipitation over a longer duration. Precipitation can be divided into three categories, based on whether it falls as liquid water, liquid water that freezes on contact with the surface, or ice. Droughts occur mainly in areas where normal levels of rainfall are, in themselves, low. If these factors do not support precipitation volumes sufficiently to reach the surface over a sufficient time, the result is a drought. Drought can be triggered by a high level of reflected sunlight and above average prevalence of high pressure systems, winds carrying continental, rather than oceanic air masses, and ridges of high pressure areas aloft can prevent or restrict the developing of thunderstorm activity or rainfall over one certain region. Once a region is within drought, feedback mechanisms such as local arid air, hot conditions which can promote warm core ridging, and minimal evapotranspiration can worsen drought conditions.

Within the tropics, distinct, wet and dry seasons emerge due to the movement of the Intertropical Convergence Zone or Monsoon trough. The dry season greatly increases drought occurrence, and is characterized by its low humidity, with watering holes and rivers drying up. Because of the lack of these watering holes, many grazing animals are forced to migrate due to the lack of water in search of more fertile lands. Examples of such animals are zebras, elephants, and wildebeest. Because of the lack of water in the plants, bushfires are common. Since water vapor becomes more energetic with increasing temperature, more water vapor is required to increase relative humidity values to 100% at higher temperatures (or to get the temperature to fall to the dew point). Periods of warmth quicken the pace of fruit and vegetable production, increase evaporation and transpiration from plants, and worsen drought conditions.

Drier and hotter weather occurs in parts of the Amazon River Basin, Colombia, and Central America during El Niño events. Winters during the El Niño are warmer and drier than average conditions in the Northwest, northern Midwest, and northern Mideast United States, so those regions experience reduced snowfalls. Conditions are also drier than normal from December to February in south-central Africa, mainly in Zambia, Zimbabwe, Mozambique, and Botswana. Direct effects of El Niño resulting in drier conditions occur in parts of Southeast Asia and Northern Australia, increasing bush fires, worsening haze, and decreasing air quality dramatically. Drier-than-normal conditions are also in general observed in Queensland, inland Victoria, inland New South Wales, and eastern Tasmania from June to August. As warm water spreads from the west Pacific and the Indian Ocean to the east Pacific, it causes extensive drought in the western Pacific. Singapore experienced the driest February in 2014 since records began in 1869, with only 6.3 mm of rain falling in the month and temperatures hitting as high as 35 °C on 26 February. The years 1968 and 2005 had the next driest Februaries, when 8.4 mm of rain fell.

Human activity can directly trigger exacerbating factors such as over farming, excessive irrigation, deforestation, and erosion adversely impact the ability of the land to capture and hold water. In arid climates, the main source of erosion is wind. Erosion can be the result of material movement by the wind. The wind can cause small particles to be lifted and therefore moved to another region (deflation). Suspended particles within the wind may impact on solid objects causing erosion by abrasion (ecological succession). Wind erosion generally occurs in areas with little or no vegetation, often in areas where there is insufficient rainfall to support vegetation.

Loess is a homogeneous, typically nonstratified, porous, friable, slightly coherent, often calcareous, fine-grained, silty, pale yellow or buff, windblown (Aeolian) sediment. It generally occurs as a widespread blanket deposit that covers areas of hundreds of square kilometers and tens of meters thick. Loess often stands in either steep or vertical faces. Loess tends to develop into highly rich soils. Under appropriate climatic conditions, areas with loess are among the most agriculturally productive in the world. Loess deposits are geologically unstable by nature, and will erode very readily. Therefore, windbreaks (such as big trees and bushes) are often planted by farmers to reduce the wind erosion of loess. Wind erosion is much more severe in arid areas and during times of drought. For example, in the Great Plains, it is estimated that soil loss due to wind erosion can be as much as 6100 times greater in drought years than in wet years.

Activities resulting in global climate change are expected to trigger droughts with a substantial impact on agriculture throughout the world, and especially in developing nations. Overall, global warming will result in increased world rainfall. Along with drought in some areas, flooding and erosion will increase in others. Paradoxically, some proposed solutions to global warming that focus on more active techniques, solar radiation management through the use of a space sunshade for one, may also carry with them increased chances of drought. 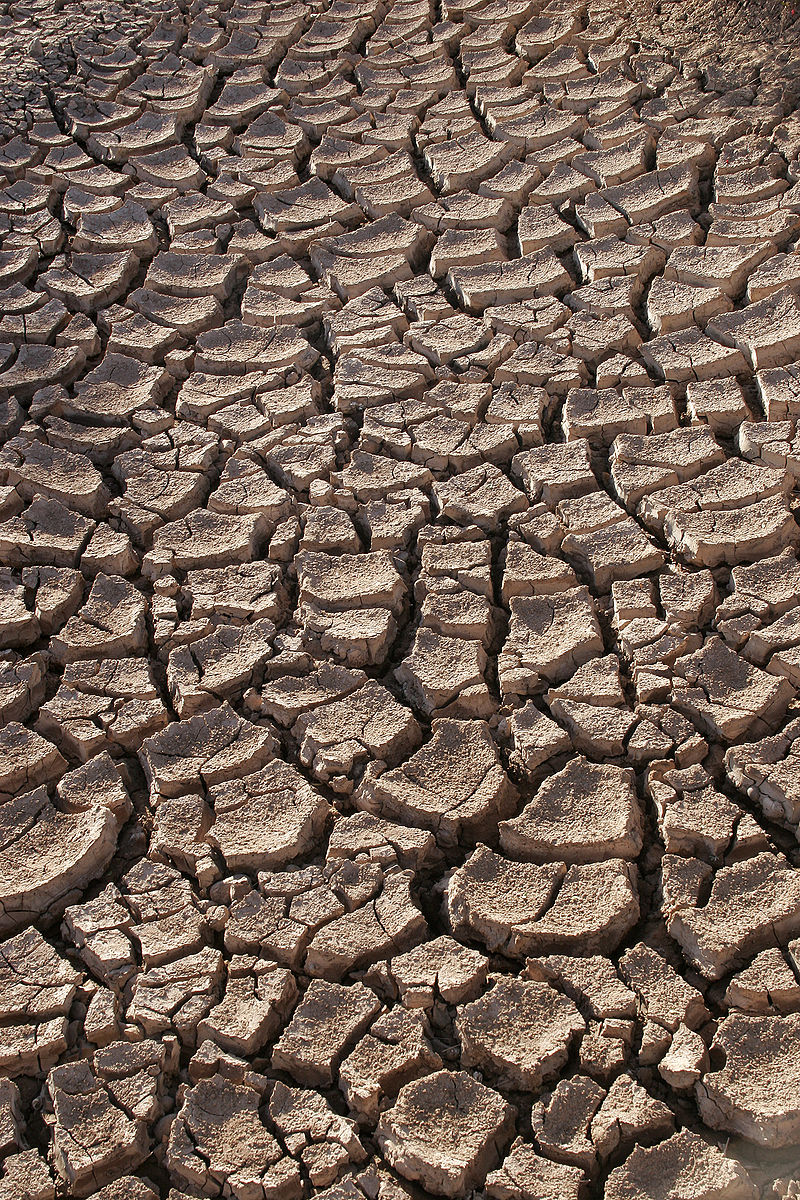 As a drought persists, the conditions surrounding it gradually worsen and its impact on the local population gradually increases. People tend to define droughts in three main ways: Meteorological drought occurs when there is a prolonged time with less than average precipitation. Meteorological drought usually precedes the other kinds of drought. Agricultural droughts affect crop production or the ecology of the range. This condition can also arise independently from any change in precipitation levels when soil conditions and erosion triggered by poorly planned agricultural endeavors cause a shortfall in water available to the crops. However, in a traditional drought, it is caused by an extended period of below average precipitation. Hydrological drought is brought about when the water reserves available in sources such as aquifers, lakes and reservoirs fall below the statistical average. Hydrological drought tends to show up more slowly because it involves stored water that is used but not replenished. Like an agricultural drought, this can be triggered by more than just a loss of rainfall. For instance, around 2007 Kazakhstan was awarded a large amount of money by the World Bank to restore water that had been diverted to other nations from the Aral Sea under Soviet rule. Similar circumstances also place their largest lake, Balkhash, at risk of completely drying out.

Agriculturally, people can effectively mitigate much of the impact of drought through irrigation and crop rotation. Failure to develop adequate drought mitigation strategies carries a grave human cost in the modern era, exacerbated by ever-increasing population densities. President Roosevelt on April 27, 1935, signed documents creating the Soil Conservation Service (SCS)—now the Natural Resources Conservation Service (NRCS). Models of the law were sent to each state where they were enacted. These were the first enduring practical programs to curtail future susceptibility to drought, creating agencies that first began to stress soil conservation measures to protect farm lands today. It was not until the 1950s that there was an importance placed on water conservation was put into the existing laws (NRCS 2014).