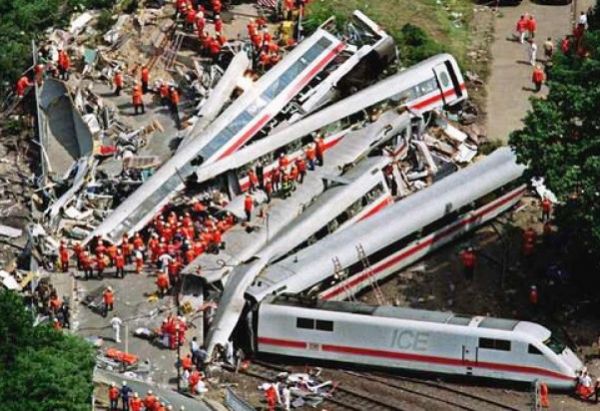 Rail accidents occur when trains travelling on the same tracks collide or when trains derail because of technical faults in the rolling stock, the rails or the security systems, or because of landslides, avalanches or objects obstructing the rails (possibly caused by deliberate actions, such as terrorist attacks). Usually, these types of accidents cannot be avoided as the train driver or security personnel do not have enough time to react, unless they are travelling under special protection because of an exceptional situation. Such accidents cause direct and indirect damage to people and the environment, especially when they involve trains carrying freight or dangerous or polluting substances. They are relatively rare, however, and can be avoided by taking strict preventive and protective measures (establishing regulations, signalling systems, training personnel) that minimise technical and human failures and malicious attacks. This involves installing a reliable alarm and security system and regular surveillance of rail installations and equipment.

The control of all accidents is, in the first instance, the responsibility of the commander (chief) and personnel of the affected means of transport. It is up to them to limit the resulting damage as much as possible. Passengers must obey the directives of the personnel on board (protective and rescue measures) and behave as they are instructed by the regulations on disaster situations, especially air, rail or maritime disasters.

As far as search, rescue and assistance operations are concerned, the means or system of transport involved and the area (country) where it occurs will determine who is the person in charge at the disaster site.

The principles of intervention are as follows:

- In the case of an air disaster occurring on, or in the immediate vicinity of, an airport (generally within a 5 kilometre radius), control of the incident is the responsibility of the airport authorities since control of the air traffic is the responsibility of the airport in question and the control tower is in charge of warning the security and intervention services. They can, if need be, call upon local fire brigades and civil defence reinforcements. Generally the special disaster rescue plans (red alert, special plans for the airport) will only be activated with the agreement of the competent political authorities.

- If the incident occurs outside the area under control of the airport authorities, the political authorities of the affected area will be in charge of the deployment of local intervention teams (police, fire brigade, civil protection, health services, etc.). Control of the rescue efforts will, if necessary, be taken over by higher authorities (regional, departmental) in collaboration with experts from the aviation services and the judiciary (establishing responsibility
for the disaster, identifying victims, collection and restitution of personal belongings) and representatives of the transport company involved.

- As regards road accidents, it is important to make the distinction between those occurring on motorways and those taking place on other roads, bearing in mind the special regulations that may govern certain communications routes or sensitive areas.

Operational control of interventions on roads is initially ensured by the traffic or rescue control centre of the motorway which is alerted by witnesses (using the motorway telephone network) or by a police patrol. The rescue means will be supplied by the rescue centre ( traffic control) and by the neighbouring emergency services. If need be, specialists in dealing with dangerous substances (chemical or radioactive products, hydrocarbons, etc.) and the health services (helicopters, ambulances, specially trained medical personnel) can also be called upon to help. In general, a special plan drawn up as a precaution will be activated. Major accidents occurring on roads other than motorways come under the control of the political authorities of the area in which they occur; they ensure the initial intervention using the means at their disposal. In case of particularly bad accidents, namely fires or leakage of chemical substances or pollutants, a higher management level will be called upon to intervene and conduct the operations (special plans).

- Rescues in the case of maritime or river disasters follow the principles of solidarity between seafaring people and the norms of national and international maritime law.
In the event of an incident, the rescue measures on board are the responsibility of the captain of the vessel whose priority should be to save the passengers and then the crew. Moreover, maritime nations generally possess a national service for the sea and navigable channels which is responsible for ensuring the supervision and security of national waters and coasts and also the organisation of rescue at sea.
Because of the specific conditions of navigation at sea, on lakes and rivers, interventions should be the object, in every state concerned, of special emergency plans put into action as soon as the alert is given by a chief of operations named in advance.

In case of ecological disaster (chemical and radioactive substances, hydrocarbons) the rescue and protection measures for waterways and coasts should be implemented in close collaboration with the United Nations Office for the Coordination of Humanitarian Affairs (OCHA).

Instructions for the population

General precautions and cautionary measures for users of different means or types of transport
- Inform yourself on the dangers involved in using various types of transport.
- Study the regulations and suggested rules of behaviour published by the transport companies or crew (posters, written instructions, presentations).
- In case of imminent danger (emergency situation), make sure that you know the whereabouts of the protection and rescue apparatus.

When the accident occurs
- Keep calm and avoid panic; to the extent possible, help family and neighbours who are in difficulty.
- Follow the captain's (or driver's) orders and those of the crew.
- Keep identity papers and important personal documents (medical and vaccination certificates and details of blood type) and any personal medicines with you.
- As soon as the crash or shipwreck occurs try to free yourself from the cabin and to escape quickly from the wreckage, especially if there is a danger of fire or dangerous leaks. Seek refuge at a sufficient distance.
- If possible, activate the rescue process by alerting the local security or specialist services (special telephone networks and numbers).
- In case of a major accident occurring in a road with traffic, direct the traffic whilst taking care of your own safety (signal and mark the accident spot).
- Do not touch or move the seriously wounded unless there is a risk of fire or toxic fumes.
- It is the duty of witnesses to alert the rescue services and to give them the exact location and nature of the accident, the type of vehicle involved, the characteristics (code number) of any dangerous substances and the likely number of victims. Witnesses should also give their names and addresses.

After the accident
- Keep calm and avoid panic.
- Follow the instructions of the intervening bodies and of the rescue personnel.
- If possible, and if necessary, collaborate with the rescuers and with the judicial authorities and experts in charge of the investigation.Top of Form